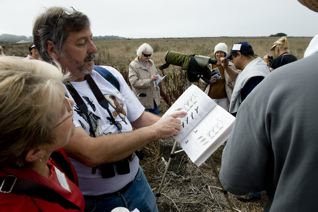 The Ocean Shore Railroad operated for the first two decades of the 20th Century, bringing people to the then sparsely populated San Mateo coast and giving birth to the towns we know today as Pacifica, Montara, Moss Beach, El Granada and Half Moon Bay.

Although the Railroad is gone today, there is an area in Half Moon Bay called the Railroad Right-of-Way (RRoW) which is still vital to the town of Half Moon Bay. The RRoW runs from Kelly Avenue south to Seymour Street between the western edge of the Arleta Park and Alsace Loraine neighborhoods, and a pristine open space bluff top overlooking the Pacific Ocean. The Coastside Land Trust (formerly HOST, or Half Moon Bay Open Space Trust) worked with a group of coastside residents to raise the funds for the City of Half Moon Bay to purchase the RRoW from private owners in 2004. The Coastside Land Trust is the holder of the conservation easement over the RRoW and is sponsoring the April tour, which is designed to familiarize the local community with the history of the railroad, wildlife and native plants that are abundant in the area.

The tour will start at 10 a.m. across from the original Arleta Depot (which has been a private home for many years) at the corner of Poplar St. and Railroad Ave. in Half Moon Bay. Members of the board of directors of the Coastside Land Trust and Executive Director Jo Chamberlain will welcome participants and discuss the environmental significance of the RRoW easement for the coast. Native plant specialists Avis Boutell and Nancy Frost will speak about the California native plants found in the area. Gary Deghi, a professional biologist, will describe the wildlife that inhabit the area and highlight bird species of interest. Local historian Liz Allison will talk about the railroad’s history.

Participants will walk along the Railroad Right-of-Way with our native plant, wildlife and history guides who will tell us more about the richness of the area at each of the successive three "stops": Central Avenue and Railroad Avenues at 10:45 a.m; Miramontes Avenue and Railroad Avenue at 11:15 a.m.; and the bluff edge at 11:45 where we will view two endangered plant species, view ocean-dwelling birds and hear more about the Ocean Shore Railroad history. The event will conclude at 12:30.

Join us as we retrace the path of the famed Ocean Shore Railroad. Participants will meet at the Vallemar Restaurant (a former depot), 2125 Coast Highway in Pacifica, where we will view two models of the famed railroad and enjoy numerous photographs showing the Railroad and period coastal views. Following an overview of the railroad’s history by tour conductors, participants will drive to see one of the remaining railroad cars, which is housed in Pacifica, and several of the remaining depots in Pacifica, El Granada and Half Moon Bay.

Space is limited and pre-registration is suggested by visiting CoastsideLandTrust.org and making a $25 donation.