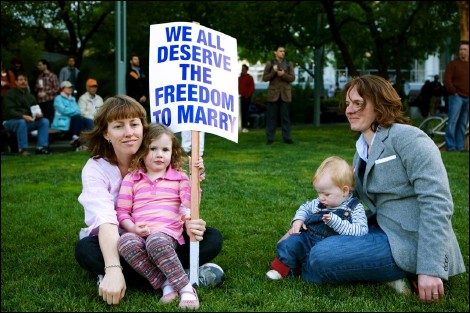 Sabrina Brennan
Click to see Sabrina's album from the protest in San Francisco.

1969 was my birth year and the beginning of the Gay Liberation Movement.  The Stonewall riots took place June 28, 1969 in Greenwich Village.  In April, 1993 I was 23 years old and a photography student at the Atlanta College of Art.  That year I made a road trip to Washington, DC to take part in the March on Washington for Lesbian, Gay and Bi Equal Rights.  My friends and I drove all night through a heavy rainstorm to make it in time for the the lesbian march, affectionately referred to as the Dyke March.  It was scheduled for the night before the main march.  This tradition continues today, a Dyke March is almost always the night before a Gay Pride March.  Thousands of women turned out from all over the southeast and east coast and took over the streets around the Capitol.  I remember running though the crowd in a pair of old combat boots and carrying a camera while women around me chanted "Hey, hey, ho, ho, Jesse Helms has got to go."

The next day a mass wedding took place at noon on the mall. The Aids Quilt covered almost every inch of grass, from the Washington Monument to the Capitol.  Chants that day included: "Act Up! Fight Back! Fight AIDS!" and "We’re here. We’re queer. We’re not going away."  It was estimated that one million LGBT people were in DC for the March on Washington.  The mood was optimistic and I believed equality might be around the next corner.

Later that day I took the train to visit my relatives in Bowie, Maryland.  My mother’s youngest brother and his two sons met me at the train station.  Uncle Coerte is an astrophysicist at NASA.  The first question he asked was; "Why are you in town?"  Coerte never waits for an answer, he went on to say; "This is a terrible time to visit, the gays have taken over and traffic is a mess.  The special interest groups are ruining things. Why are you here now?"

I realized the side-trip to visit my relatives was a mistake.  I should have stayed with my friends and enjoyed the festivities.  I did not visit my uncle again until the summer of 2008 while on a business trip to Annapolis.  This time I met Coerte, aunt Wendy and cousin Eric at my hotel and we had dinner at a restaurant overlooking the harbor.  It was awkward at first.  I think they felt uneasy about missing my wedding the summer before.  After a round of drinks we were in good spirits and discussing the upcoming presidential election.  I was relieved that they were supporting Obama and my cousin Eric asked; "At what age did you know you were gay?"

On Tuesday, May, 26th 2009 I took the day off work to photograph San Francisco’s reaction to the California Supreme Court decision on Prop 8.  I’m still hopeful that equality is around the corner.