Letter: Why was Pillar Ridge moved from Moss Beach to El Granada in 2008 census? 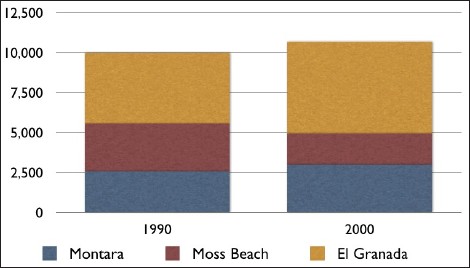 In crunching the Midcoast numbers from the 2000 census, whoever was in charge decided to move the mobile home park from Moss Beach to El Granada, moving it to a different mailing address, and water/sanitary district.  It made for a sharp drop in population for Moss Beach from the previous census and an unusual increase for El Granada, essentially making the 10-year comparisons useless.
If statistics are supposed to help planning, it seems counter-productive to assign a significant neighborhood population to a census area in a different water/sanitary/postal district.  One wonders what could have been the reason for this.  Was there a confusion about the location of the Pillar Ridge community because it was called El Granada Mobile Home Park at the time?