Lonely are the Brave, Fri 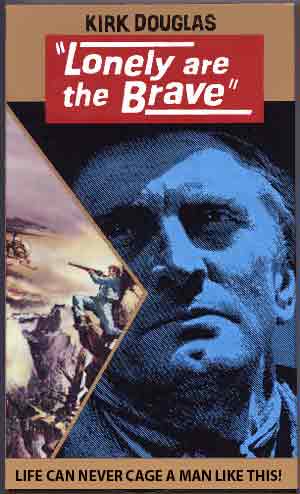 Hollywood superstar Kirk Douglas produced and stars in his favorite film, a nuanced and beautifully shot western that laments the vanishing of the Old West and its breed of heroes and mores.

Kirk Douglas, a star known for his independence and contempt for the constraints of the studio system, loved Edward Abbey’s novel, "The Brave Cowboy", the moment he read it. He bought the rights and hired another rebel, his friend the black-listed screenwriter Dalton Trumbo, to write the screenplay. He filled the cast with the best up and coming actors he could find. The film got very little promotional push when it was released and died quickly at the box office.  Small art theaters began booking the film, which gradually became one of the most beloved westerns of all times.

The plot: Jack Burns (Douglas) is fiercely independent cowboy still rolling his own smokes in 1962. He gets himself tossed into jail to spring a friend (Michael Caine). Turns out his friend is quite happy where he is. So Jack escape by himself, in the process branding himself as a serious criminal. Jack bolts for the Mexican border on his trusty horse Whiskey. Sheriff Johnson (Walter Matthau), admires Jack’s pluck, but feels duty bound to use all the jeeps and helicopters he can lay his hands on to chase Jack down.
"The performances are strong. Matthau and Gena Rowlands are particularly memorable. But it is Douglas’ film. He exerts his presence and believability in the role of the man who wants to keep his soul free. The director David Miller never did anything better." George Perry, BBC