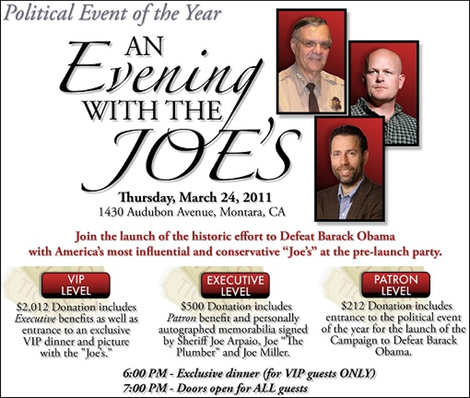 There are many reasons I am grateful I no longer live in in Maricopa County—but America’s Sheriff Joe Arapaio is a big one. He’s part of the Three Joe’s (sic) touring company that touched down in Montara this evening for a Tea Party fundraiser.  This will be the first and last time Montara makes the Daily Kos.

“Sheriff” Joe Arpaio is apparently sanguine enough in his recent thrilling victory over an unarmed chicken farmer that he will be defil^H^H^H^H^Hvisiting Montara, CA, tomorrow (2011-03-24) as one of the featured speakers at an anti-Obama fundraiser.

Literally, that’s what it is: “...the launch of the historic effort to Defeat Barack Obama,” organized by the Our Country Deserves Better PAC, whose director is Howard Kaloogian, who you may remember as the guy who posted a photo of a quiet street in Istanbul, Turkey, and claimed it was from liberated Baghdad.

The event is entitled, “Evening with The Joes.” Arpaio’s co-guests are Joe Miller—the Alaskan teabagger who lost his US Senate bid to Lisa Murkowski’s write-in campaign—and Not-Joe the Not-Plumber (Samuel J. Wurzelbacher). Yes, all top-shelf. No expense has been spared. VIP-level admission to the event is $2012.00. (Oh, I see what you did there…)

The depths of Arpaio’s moral bankruptcy are expressed with surprising succinctness in his interview with Joe Garofoli. He blows all the right-wing and Tea Party dog whistles, and does so with malignant glee.  He also dares protesters to show up and get in his face.

Still, the more I think about this, the more ridiculous it sounds. They’re flying in three guys to the San Francisco Bay Area to hold a fundraiser, but don’t hold it in the City proper, where it would be much more convenient. Instead, they drive all the way down to Montara (over Devil’s Slide, no less) to hold it in the middle of what will be a mud field if the weather forecasts pan out. Admittedly $2012.00 is fiddling small change as far as Republican fundraisers go, but still, you’d think they could have scored a ballroom at the Hyatt Regency Embarcadero or something…

Greetings from Birmingham, Alabama where I live today but am originally from the Bay Area. Not sure what to think about Montara that great beach town hosting a “Three Joe Tea Party” event. What is this all about as I am really concerned about what “Tea Party” really means.
What political affiliation do they align with? Looks to me that maybe “Tricky Dick Nixon” is the closest hero of theirs. Don’t count Ronald Reagan in on this one as he would laugh you all off and right out of the country. Take it from a true Californian and Ronald Reagan follower that my advice is very sound.
You do not bash a sitting USA President whether he be Barack Obama or the Man in the Moon especially when you are all so mis-informed. Barack inherited the “poor status” of our State of the Union from your hero “W” so take it from a GOP expert like me that the “Real Bad Guys” are still out there. Got it…...so what are you waiting on. Go find this band of nitwits and get real…and why don’t you folks in Montara and Half moon Bay work on something more constructive like getting Martin’s Beach re-opened. Now that is a “real project”....

I wish I had know earlier so I could have organized a “welcoming committee”. Here is a little article on “Sheriff Joe” which will give people a flavor of his idea of “justice”.

I guess the Tea Party is ok with spending money on tanks for SWAT teams to bust up chicken fights but not on paying teacher’s salaries.

There were 30 or 40 cars at the event. I saw at least one John Birch Society bumper sticker—the first one I’ve ever seen in the wild. And I used to live in Orange County.

Seriously, any event built on these three knuckleheads must have drawn a pretty extreme crowd.

Goshes, I once talked for ten minutes with Sheriff Joe and the former mayor of Fountain Hills, AZ. Didn’t cost me a cent. (Subject was incorporated cities contracting with counties for law enforcement services.) Now I’m wondering what to do with the thousands I saved.

This was at an art fair where Sheriff Joe shows up in the Chamber of Commerce booth every year to sign pink underpants of the kind male inmates are forced to wear in his jail. Didn’t pop for a pair of those, so there’s another $500 in savings at Montara rates.

Any thoughts on what to do with $2,512 of new-found money in these screwy times?

Carl,
Put your money back in your piggy bank and save it for a rainy day or take your bride or girlfriend out on a long weekend away from home.
From the looks of that Tea Party banner it appeared to me that Joe, Joe and Joe were on a campaign tour to bash the USA President Barack Obama. Get the word to these “Three Stooges” that their “Tea Party” message runs contrary to the thoughts of “Great USA and Foreign Nation” smart people. Pass along also my personal “Shut Up and Sit Down” message from me to them also.
If these jimbobs or joebobs give you any grief, have any issues with me or need a debate or further lessons in USA History than have then call me anytime and I will check my calendar. I will be waiting….thanks again