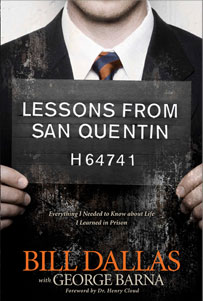 Montaran Bill Dalla has just published a book on what he learned while doing two and a half years in San Quentin, reports the County Times.

"If you gave me one hour on this Earth to go anywhere, I’d want to go back to San Quentin and walk around the yard," said Dallas from his living room, where you can look onto Montara State Beach. "It was ground zero for me. It’s where I nearly lost my life and, ultimately, where I found it."

Convicted of felony grand theft and embezzlement, Dallas would curl up into a ball in that yard as inmates walked around him.

"I prayed that God would take my life," Dallas said Monday.

Last week, his book, "Lessons from San Quentin," was released.

Co-written by George Barna, founder of The Barna Group, the book illustrates 12 lessons intended to help people in tough times develop the character God wants people to have.