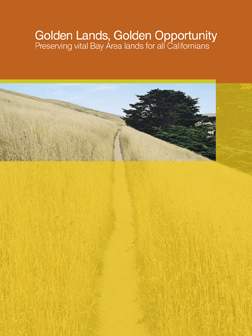 The giant green corridor envisioned in the report would not mean commerce or private business would cease. The 100,000-acre coastal dairy belt in Sonoma County, vineyards in Napa and fertile farmland in Contra Costa, Santa Clara, Solano and Marin counties would be protected.

Trails linking 47 cities in the nine Bay Area counties would also be funded, including the 500-mile Bay Trail and the Carquinez Strait Scenic Loop. In San Francisco, a 13-mile corridor along the southeastern waterfront known as the Blue Greenway would bring recreation to an underserved area of the city.

Watersheds along the San Mateo and Santa Clara county coasts, urban parks in Alameda and the 470,000 acres of redwood forests and woodlands in Sonoma County would be protected under the plan.

The goals outlined in the report are to make sure all Bay Area residents have a park within a 10-minute walk of their home, to improve urban parks and to create transit connections.

High-priority lands would either be purchased or placed under conservation easements. Farmers and other land stewards would be given the support and resources needed to take care of the land and sell locally farmed products.

Strong land-use policies would be enacted in every Bay Area city, according to the report. That would mean establishing urban growth boundaries especially in Solano and Contra Costa counties, where suburban sprawl threatens open space.