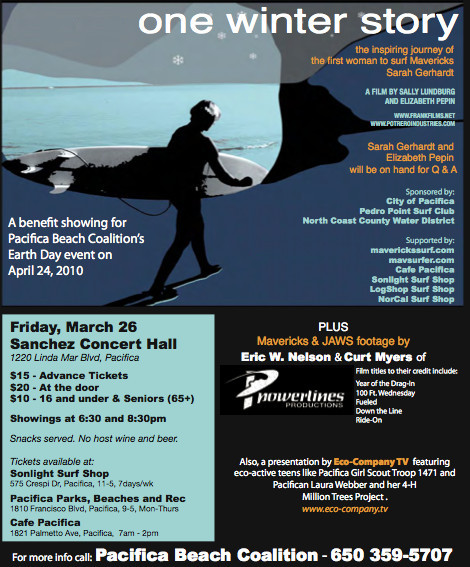 Ask any local surfer and they will tell you that this winter has been one for the record books as far as surfing goes.  For example: Maverick’s, the nearby world-class big wave surf spot a few miles south of Pacifica has seen more ridable days this season than in the past ten.  When the subject of surfing there comes up, however, most envision in their minds-eye male surfers careening down massive walls of water.  But in recent years, a small cadre of female surfers has begun to take their rightful place at Mav’s and have been turning heads with their amazing surfing skills.  They – and their male counterparts – all point to Sarah Gerhardt as the first woman to paddle out at Maverick’s and take the drop.

The Pacifica Beach Coalition (PBC) in association with Recology of the Coast invite you to the 3rd annual benefit surf movie screening on Friday, March 26th at the Mildred Owen (formerly known as “Sanchez”) Concert Hall, 1220 Linda Mar Blvd. in Pacifica to see “One Winter Story”, a film by Sally Lundburg and Pacifican Elizabeth Pepin that documents Sarah Gerhardt’s inspiring journey that led up to the first of many sessions at Maverick’s.  Doors will open at 6:00 PM with two screenings at 6:30 PM and 8:30 PM.  Sarah Gerhardt and Co-Producer/Director Elizabeth Pepin will be on hand after each screening to discuss the film with the audience.

“One Winter Story” is an unprecedented glimpse into the world of big-wave surfing from an unusual and seldom seen perspective - a woman’s.  This hour-long film is a personal documentary that follows Sarah as she surfs Maverick’s but it also shows that Sarah’s path to this legendary surf spot was anything but easy. Surfing became her escape from the hardships of home while faith became the guiding force in her life. Sarah is a genuine big-wave pioneer, the first woman to surf what is one of the largest waves in the world.  In the years she has been surfing the wave, Sarah has discovered that although she has many limitations, Maverick’s allows her to live as though she doesn’t have any, bringing her peace as she finds her place in the lineup, and in the world. Also featured in the film are big wave surfers Mike Gerhardt, Ken Bradshaw, and Jenny Useldinger.  “One Winter Story” will be of interest to both surfers and non-surfers alike because it has elements that everyone can relate to their own lives.  (i.e.  It’s not just a “surf movie.”)

The film has won numerous awards, including the Audience Choice Award at the 2007 Ocean Film Festival, San Francisco; Best Surf Film, 2007 International Surf Film Festival, St. Jean, France; Jury Selection Award, 2007 Santander Sports Film Festival, Cantabria, Spain among many others.  For more information about this great film and other film projects by the talented producers and their associates, please go to www.potreroindustries.com or www.frankfilms.net.

Prior to the screening of “One Winter Story”, a short film will be shown of fresh 2010 footage of Maverick’s and Jaws (a big wave surf spot in Maui) courtesy of filmmakers Eric W. Nelson and Curt Myers of Powerlines Productions.  In addition, short films courtesy of Eco-Company TV featuring Pacifica Girl Scout Troop 1471 and Pacifican Laura Webber and her 4-H Million Trees Project will also be screened.

Tickets are $15 in advance, $10 for anyone 16 years of age or under or for anyone who has reached 65 years plus.  (How does time go so fast?)  Advance tickets can be purchased at Sonlight Surfshop, 575 Crespi Drive; City of Pacifica’s Parks, Beaches and Recreation office, 1810 Francisco Blvd. or at Café Pacifica, 1821 Palmetto Ave.  Tickets at the door will be $20.

In addition to premier sponsor Recology of the Coast (Pacifica’s new provider of garbage and recycling services); sponsors of this unique event include the City of Pacifica’s PB&R department, Pedro Point Surf Club, Pacifica Performances and North Coast County Water District along with support from Pacifica’s Environmental Family, the non-profit fiscal sponsor of the PBC.  We also gratefully acknowledge the support of Mavsurfer.com, Maverickssurf.com, Sonlight Surfshop, NorCal Surfshop and Log Shop Surf Shop.

We hope you can join us on Friday evening, March 26th at the Mildred Owen Concert Hall at either 6:30 or 8:30 for a great evening and a surf film extravaganza while raising money for yet another great celebration of Earth Day here in Pacifica.  Last year’s screening was a lot of fun and this one holds much promise for another great experience.