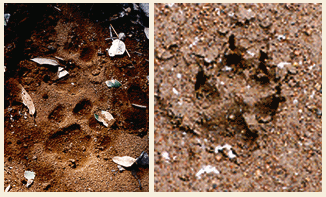 Keep Me Wild, California Department of Fish & Game
Identifying Mountain Lion Tracks: The mountain lion track on the left can be distinguished from the dog track on the right by the absence of toenail prints and by the “M” shaped pad

Pescadero Creek County Park in La Honda is reopened, reports the Mercury News. It was closed when a pair of mountain lions came within a few feet of two hikers late Sunday afternoon.

The brothers stood their ground, shouting and swinging a stick, and after several minutes the lions retreated. On Monday, wardens led a pursuit of the lions using trained hounds, and by Tuesday they were confident the animals had fled the park.

This type of encounter, involving multiple aggressive cougars, is "rare but not unheard of," said Patrick Foy, Fish and Game warden. The brothers reacted correctly to the threat, Foy said, adding that running away could have triggered the lions to pursue them. [..]

"That’s what’s very odd about this," he said. "Most lion attacks, the victim never sees it coming."