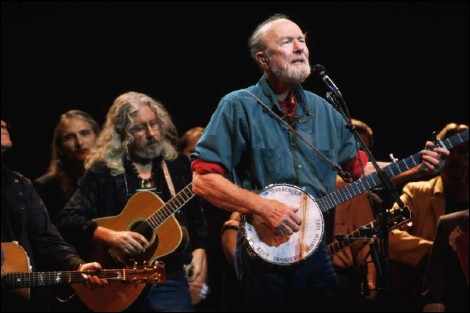 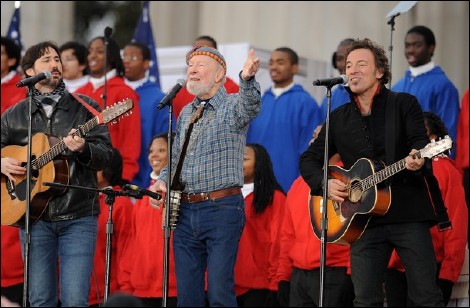 Pete Seeger: The Power of Song, an informative and up-lifting documentary about the life and work of folk-singer and activist Pete Seeger, will be presented by The Visionary Edge at 7:30 pm, Saturday, February 21st at The Johnson House Train Depot in Half Moon Bay.

In honor of Pete’s work, Eleanor Walden, community organizer and founder of  the movement to nominate Seeger for a Nobel Peace Prize, will be present to talk about her years of activism working with Seeger on tour for the Progressive Party in 1948 and later during the Civil Rights  movement.

Pete Seeger: The Power of Song starts out with Pete doing what he does best: standing on stage, singing, encouraging the crowd to sing along with him. By the end of the opening scene, the crowd’s chorus is so big and loud, it overwhelms Seeger’s voice, as he moves away from the mic a bit and lets them drown him out.

Through interviews with artists ranging from Peter Yarrow (Peter, Paul and Mary) to Bruce Springsteen, Joan Baez and Bob Dylan to Natalie Maines (the Dixie Chicks), The Power of Song not only introduces the viewer to the life and work of Pete Seeger, it is irrefutable proof of the value of his work.

Most moving are the moments when Seeger tells his own story. Peppered at turns by interjections from his wife, Toshi, his son Dan, his brother and sister, his children and grandchildren, the story, in and of itself, is moving.

Says Reba Vanderpool of The Visionary Edge, this one quote about how important it is to him to get an audience singing sums up the reason I love Pete Seeger: "I guess it’s kind of a religion with me to get people to sing along. Change will happen – not because of big organizations, but because of the work of thousands and thousands of  little ones.  It will come about because of the people.  I’ve never sung alone in my life. Participation is what’s going to save the human race."

Pete Seeger is the son of musicians. His father was a scholar and one of the early musicologists. Pete grew up with a thirst and love for music, but even more so, a sense of the importance of bringing the people’s music to the world.

The film follows his career through history. Indeed, his career forged its own path and at other moments, encouraged history itself to progress. President Clinton says in the film  "Some artists make music history; Pete Seeger made history with his music."

It’s the history of not only a man, but a nation, as it has moved through wars and human rights struggles, and as it has struggled with its own natural environment. It’s also the history of one of America’s greatest patriots, who ends the film singing with Ani DiFranco—one of the younger generation’s most ardent activist folksingers—"Bring ‘em Home." He wrote the song for the soldiers in the Vietnam War. Never tiring of the quest for peace, Seeger still stands on the road holding signs, working toward that goal.

The Power of Community

Everything about Pete Seeger stands for community. He understands and has made understood the basic fact that every voice is important in every chorus. It is his skill of rousing a room full of strangers into one harmonious refrain that has propelled his career and inspired those around him.

Toward the end of the film Seeger is pictured standing next to then President Bill Clinton, receiving an award at the Kennedy Center for his life’s work. Soon, the whole room is singing Seeger’s popular song "Turn Turn Turn." Here is the government and an American establishment paying homage to a man whom it had, 30 years before, blacklisted and banned from television and public performances for 17 years.

In addition to telling Seeger’s story, The Power of Song is an excellent testament to the mind-changing ability of music and what happens when strangers come together to sing.

There is great footage from Seeger’s early career, footage of Woody Guthrie with Sonny Terry and Brownie McGhee. Johnny Cash and Pete Seeger talk about daring to sing protest songs on television. There’s Peter, Paul and Mary recording Seeger’s "If I Had a Hammer." It shows Bob Dylan with Joan Baez at the Newport Folk Festival singing Seeger’s "Blowin’ in the Wind." Paul Robeson is seen performing in Peekskill, NY, and Seeger himself is seen organizing African-Americans in the south. Included is footage Seeger shot on his year-long trip around the world to document other forms of folk music and dance.

Not only is The Power of Song an exquisite tribute to one of America’s greatest patriots and folksingers, it pays great tribute to the history of American folk music, the communities it has inspired, and the world it has changed.

Says Vanderpool "To conclude the evening we will show Seeger’s performance at Obama’s inaugural concert where Pete, along with his grandson and Bruce Springsteen, lead the audience in a sing-a-long of Seeger’s This Land is our Land.  What a perfect end cap to Seeger’s career of activism and a great ending for an evening celebrating his life and work.  Seeger has recently been nominated for the Nobel Peace Prize by Barbara Boxer; he is certainly deserving of that honor."