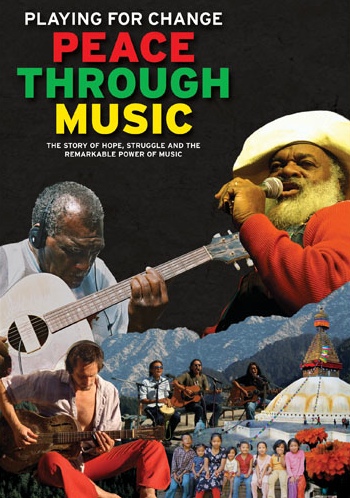 On Saturday December 5th, The Visionary Edge will screen Playing for Change: Peace Through Music which documents an unparalleled international collaboration.  The event will be co-hosted by and presented at the Community United Methodist Church in Half  Moon Bay.  Doors will open at 7:00pm, event begins at 7:30, 777 Miramontes Street (at Johnston), HMB. The event is free; donations will be   accepted to cover the costs of screening. Call 650-207-3440 for information and reservations.

Mark Johnson’s brainchild germinated in a New York City subway when two performing monks mesmerized a morning rush hour crowd by playing their simple music. Taking that concept further, Johnson realized that music was bringing all these various types of New Yorkers together, even luring them away from the rigidity of getting to work on time.  Out of this observation, the idea for Playing for Change was born.

Playing For Change: Peace Through Music is a story of hope, struggle, perseverance and joy. Directors Mark Johnson and Jonathan Walls traveled the globe with a single-minded passion to connect the world through music. "Playing For Change came out of the idea that we have to inspire each other, to come together as a human race, and that music is the best way to do this," Johnson explained. "The project started four years ago on the streets of Santa Monica, California. We recorded a street musician, Roger Ridley, performing the song Stand By Me. We then traveled all over the world, through streets, subways, Native (American) Indian reservations, African villages, Himalayan mountains…we went to Dublin…recorded and filmed Bono. None of these musicians had ever met in person. It was the music that brought them together, and the belief that we can do a lot more for this world if we work together than we ever can apart." Beyond Bono, Johnson’s cause has attracted such heavy weight activists as Keb’ Mo’ and Jackson Browne, and Los Angeles’ The Knitting Factory recently hosted a concert in which all of the band’s members—previously recorded in various international locations—finally met and played together simultaneously for the first time.

Johnson and Walls built a mobile recording studio and traveled to wherever the music took them. Technology changed from country to country, but one thing that never changed throughout the process was their commitment to create an environment for the musicians in which they could create freely and that placed no barriers between them and those who would eventually experience their music. By leading with that energy and intent everywhere they traveled, they were freely given access to musicians and locations that are usually inaccessible. In this respect, the inspiration that originally set them on this path became a co-creator of the project along with them!

Over the course of the project, they decided to create a way to give back to the musicians and their communities that had shared so much with them. In 2007 they created the Playing for Change Foundation, a separate 501(c)3 nonprofit corporation whose mission is to do just that. Even in the midst of poverty, war, or famine, the Playing for Change Foundation aims to share more than the music of the many musicians they have met during the course of their travels. They are building music schools so that these gifted artists can pass along their skills and passion to the next generation so this precious resource is not lost.

This film is the first installment of the program’s efforts to help promote world peace, and it includes their YouTube favorites such as the above-mentioned "Stand By Me" that has tallied millions of views to date. The Huffington Post’s entertainment page hosted the world premiere of "Don’t Worry" that has accumulated over a million views, and the most recent video, "One Love," is close to a million.

According to Reba Vanderpool of The Visionary Edge, “screening Playing for Change is a great way to end 2009. It sums up the mission of The Visionary Edge, which is to bring people together in unity of purpose and to inspire us all to help create the changes that are needed. I invite people to join the movement and help this music touch more peoples’ hearts around the world. What a beautiful and celebratory way to end the year!

Babysitting will be provided for $5 per child for the evening with a 24 hour advance reservation.

Saturday, December 5th. Doors will open at 7:00pm, event begins at 7:30 at the Community United Methodist Church, 777 Miramontes Street (at Johnston), HMB. The event is free; donations will be   accepted to cover the costs of screening. Call 650-207-3440 for information and reservations.