Pumpkin Festival donates $63,000, but they’re not accepting grant applications for next year 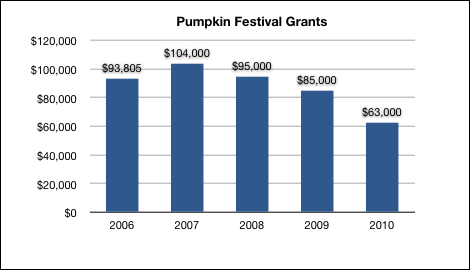 CORRECTION: The committee plans to continue to make donations to nonprofits in the next year.  However, the additional grant application process will not be conducted in 2010.

The Half Moon Bay Beautification Committee has donated $63,000 to Coastside nonprofit organizations from the proceeds of the Pumpkin Festival. This amount is down for the third year in a row.

However, for the first time in many years, the Committee will not accept applications for additional grants in 2010.  According to Tim Beeman of Miramar Events, who manages the festival for the Committee, "Although the plan is to conduct the grant application process again next year, we won’t know for certain until this time next year." Beeman says that sponsorships were off by 15% in 2009 and that the cost of producing the event goes up every year. He says that they hope to accept additional grant applications in 2011.

He noted that Coastside nonprofits take in $400,000 to $500,000 in net income from booths at the event. He knows this because they pay 10% of their net to the festival. Additionally, many groups make money from selling parking, which is not included in that number.

Follow the jump to see the details on this year’s donations.

HALF MOON BAY BEAUTIFICATION COMMITTEE ANNOUNCES DONATIONS OF $63,000
No Grant Application Process in 2010

In its 39-year history, the Beautification Committee has directly contributed more than 2.56 million dollars in grants and donations to coastside non-profit organizations and civic causes.

Funding is generated through the annual Art & Pumpkin Festival, which has been operated and managed by the Beautification Committee since 1971.

It is important to note, the grants and donations are above and beyond the estimated $400,000-$500,000 raised annually by local community service groups through parking, food, beverage and game sales at the Pumpkin Festival.

The Beautification Committee also announced the grant application process it conducts at this time every year will not take place in 2010.

"Supporting and strengthening the community by providing an exceptional opportunity for our non-profit groups to raise funds is what the Pumpkin Festival has been all about since the very beginning," said Cameron Palmer, President of the Beautification Committee Board of Directors. "While we are delighted to make these donations, the profit from last year’s festival was such that we’re not in a position to award additional grants as we have for many years."

The largest single donation ($25,000) went to the on-going maintenance and beautification of the Main Street downtown core. Among the efforts are seasonal planting of flowers, installation and repair of old-fashioned wooden benches, litter removal, cleaning, and year-round maintenance of Main Street provided by the Beautification Committee at no cost to the City.

Additionally, $5,000 in college scholarship money will be awarded to Half Moon Bay High School students. The scholarships are named in memory of founding festival members Dolores Mullin, Patsy Dutra and Melvin Mello.