Full disclosure: Cheri’s (and my) daughter Victoria is in the play. And she’s awesome.

This weekend is your last chance to catch the students of HMBHS in their Spring Musical, "Joseph and the Amazing Technicolor Dreamcoat."  Staged by a high-energy ensemble cast and crew of over 70 students, this is one experience you won’t want to miss.

Centered around the biblical tale of Joseph, the favored son of Jacob, and his 11 envious brothers,  the trouble begins when Jacob presents his son with a beautiful coat of many "Technicolor" colors. The quick fix?  Sell the dream-interpreting troublemaker into slavery.  Problem solved?  Not quite, as Joseph’s ability to interpret dreams raises him to the top of Pharaoh’s household, where ultimately the fate of his brothers lies in his hand.

The production by Director Jim Ward, Student Director Maggie Grady and HMB High School alum and choreographer Cola Claret, delivered talent and energy that engaged the audience at every turn. Intricate choreography thought out belies the fact that most of these actors were not dancers at the start of production; much success is owed to the patience and skill of Ms. Claret. 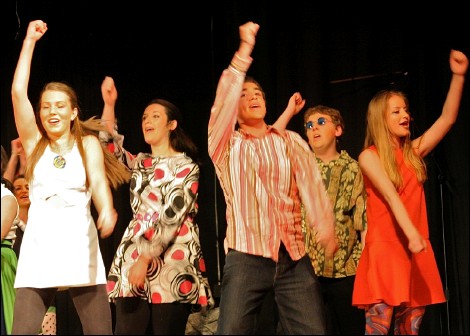 The handful of professional dancers in the cast take their craft to the next level, including an especially impressive pas de deux featuring Lexi Viernes and Max Jennings.

From the dazzling array of costumes (Robyn Hatcher and Michelle McDonald), to a camel on wheels, to a stage full of psychedelic 60’s go-go dancers replete in tie-dye, Joseph has something for everyone. The set design by veteran Janet Ebersole includes pyramids, hieroglyphics, and a few dozen giant ears of sparkling corn adding just the right visual appeal. 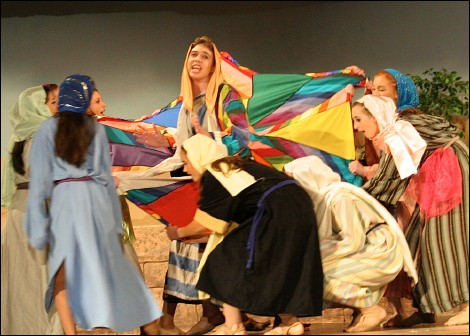 In the lead role, senior Allan Bruce expertly toggles between the bratty younger brother you love to hate, and a leader torn between empathy and revenge.   Allan’s acting shines in a particularly heat wrenching "Close every door" set against a simple jail cell on a darkened stage.

The role of the narrator, which usually falls to a single actor, is shared by three talented seniors, Jessica Ritter, Kelsey Truatman and Emily Erickson. Brimming with confidence the narrative trio command the stage with poise belling their youth.  While any one of these young ladies could carry the role, the multiple narrators help balance the large cast, and keep the audience following the narrative. 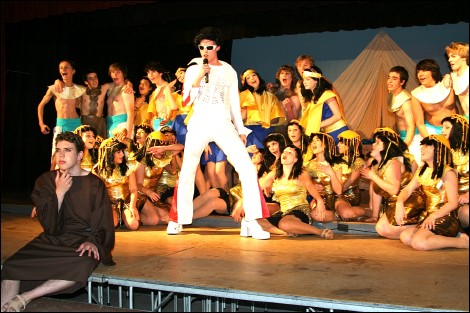 Senior James Fraser delivered a perfectly outrageous performance as Elvis/Pharaoh. He stole the show, wandering into the audience, Vegas style, to cozy up the ladies.  At one point, motioning to the stage, he ad-libbed, "See that pyramid. Yeah –it’s mine", resulting in gales of laughter. The multi-talented Fraser hit just he right notes in multiple roles as the aged grieving Jacob, self–absorbed jilted Potifer and the Pharaoh who would be Elvis.  Fraser’s over-the-top facial expressions, quirky dance moves, and strong vocals make each role the best it can be.

Major roles are not the only standouts in Joseph.  Many memorable moments such as the poor terrorized sheep, played by Jenna Lemberg, or the glinty eyed, hand ringing Ishmaelites (Luke Arella, Lexi Viernes, Evelyn Mosely, and Gabe Peretz) or Jill Lorack as Judah in the Calypso number "Benjamin" showcased just what talent can make of 15 seconds on the stage. 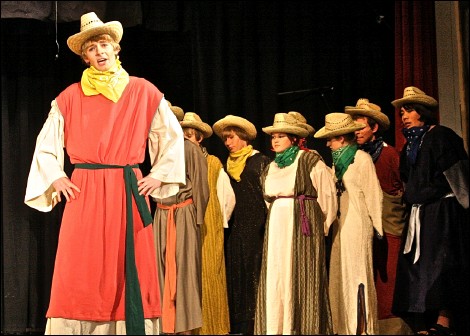 Throughout the musical, the band of 11 brothers lead by Senior Lisandro Garcia deliver time and time again. Early on, "One More Angel" stands out featuring the tangy styling of Ryan Dill, Thor Dickenson and Ethan Hofmayer that’s 100% "kiss my grits" southern. The witty Parisian sonnet of starvation, "Those Canaan Days" prompted sing alongs to "Eh bien, raise your berets" as the brothers lifted said berets with each verse. 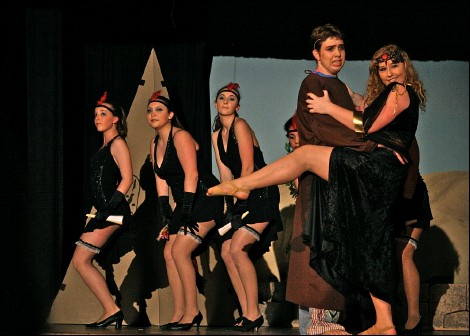 It would have been easy to resort to canned music for a high school production, but under the baton of John Lehrack, a small band of talented teens and parents blossomed to provide a robust soundtrack. Music could have easily overpowered the vocals but Lehracks restraint compliments rather than competes.

In a community that has frequently focused on teen arrests and charges of racism at the High School, I encourage you all to come out and support one of the many excellent programs our school offers our community youth.  As one of the volunteers I can personally attest to the many hours of practice by the cast, crew and managers of this production, and they deserve our support and praise. As one of my neighbors said in an email after the play, "The play was fabulous and I’m so glad I went.  The energy and talent were amazing and I came out with a renewed sense of hope for the world."  I couldn’t have said it better.