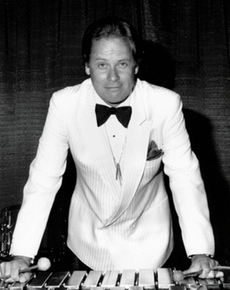 The only nationally-known 14-piece big band headquartered in SF, the Rex Allen Big Band celebrates the Swing Music hits of the 1940’s. Starring the trombonist/vibraphonist bandleader Allen, and featuring ex-Benny Goodman and Tommy Dorsey vocalist Johnny Martin in concert, Rex’s orchestra remembers 60 Years of Swing, marking its second appearance on the Bach stage, and its own 33rd anniversary as one of America’s last working Big Bands.  After a beginning listening set, the center chairs will be cleared for one hour of dancing.