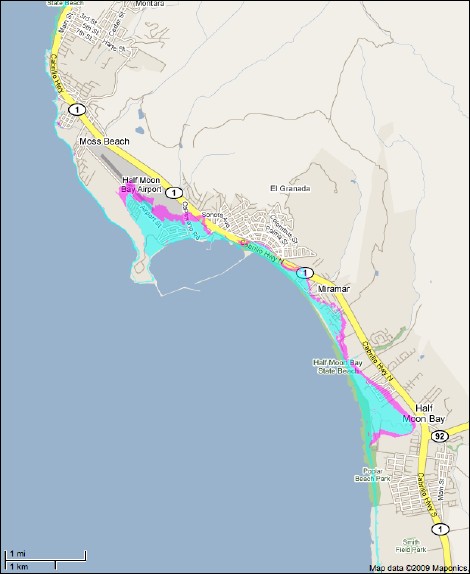 Rising sea levels are a major threat to California, according to a state-funded report from the Pacific Institute, an environmental think tank. And San Mateo County could be particularly hard-hit—on the Bayside as well as the Coastside.

But some of the aesthetic beauty and recreational values associated with the California shore, one of the state’s prime natural assets, are at risk, including the famed central coastal cliffs of Big Sur. In all, 41 square miles (66 km) of coast will be lost to erosion, according to the study.

"Changes to California coasts are inevitable," Cooley said. "We need to evaluate and assess what our values are and which qualities of the coast we want to maintain."

Flood damage envisioned by the study would result from storm surges occurring with greater frequency and intensity in low-lying areas once a safe distance from the shore. Areas that already lie within an existing coastal flood plain would face even greater risk.

About 260,000 people live in flood-prone areas around San Francisco Bay and other low-lying coastal communities up and down the state. That number would grow to 480,000 if sea levels were to rise 1.4 meters (1.4 yards) without any mitigating actions being taken, the report found.

However, most of the low-lying development is on the Bayside. There are more maps on the Institute’s website.