Silent Film Festival in Half Moon Bay on lucky Fri. the 13th 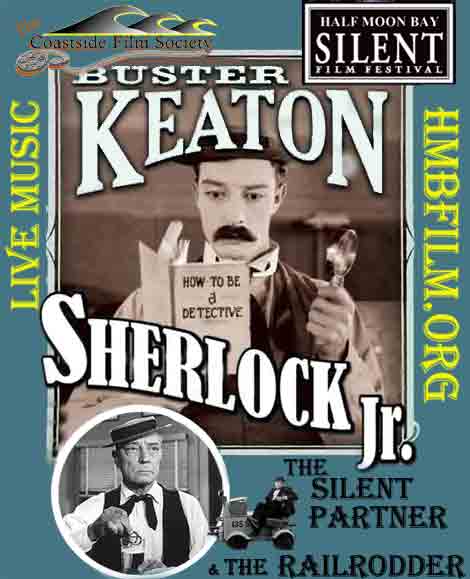 "Buster Keaton is remembered as a master of silent comedy. We remember his great deadpan expression and his fearless stuntwork, but what's often overlooked is his skill as a director. His films are tremendous not just because he was a truly fantastic performer, but because he knew how to use the camera to his best advantage." Jay Seaver, efilmcritic.com

Buster Keaton stars and directs in a silent feature that showcases his amazing physical comedy, captivating personality, and innovative use of visual effects. Keaton plays Sherlock Jr., a daydreaming movie projectionist in love with an unattainable woman. While napping on the job, Sherlock dreamwalks into a surrealistic fantasy world, where he successfully battles dastardly villains and wins the heart of his girl.

A mixture of wild slapstick physical comedy and more subtly crafted moments of humor. "The ingenuity of the set-ups and execution of the gags should impress even younger moviegoers who are spoiled by technology that can put anything a director imagines on the screen." Jay Seaver

Sherlock, Jr. will be shown with live musical accompaniment written and performed by pianist Shauna Pickett-Gordon of Montara, CA.

The arrival of TV in the 1950s helped Keaton revive his career.  In this episode (a talkee) of the Screen Directors Playhouse Keaton plays an over the hill silent film star enjoying a beer at a local bar while watching the Academy Awards. When his name comes up during the telecast and clips from his old movies begin to scroll across the screen other tipplers gradually realize they have a star in their midst. Some care deeply, others get annoyed at all the attention being played to an old has-been.

An elderly Buster Keaton revisits the glory and daring do of his silent film heyday in the final film of his long career. In this silent short Keaton plays an old English gent touring Canada in a little motorized railroad car that narrowly averts or causes calamity at every turn.