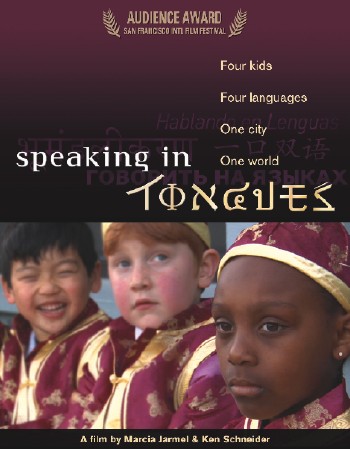 The Visionary Edge will screen Speaking In Tongues Saturday, September 12. Doors will open at 7:00pm, event begins at 7:30 at the Community United Methodist Church, 777 Miramontes Street (at Johnston), HMB. The event is free; donations will be   accepted to cover the costs of screening. Call 650-560-0200 for information and reservations. he event will be co-hosted by and presented at the Community United Methodist Church in Half Moon Bay.

The heated debate over bilingual education usually takes place in courtrooms, at academic conferences and in editorial missives. At its most vitriolic the "English only" camp skews toward xenophobia and racism, while the opposition at times sounds utopian themes of American global economic resurgence with the aid of multilingual classrooms. Often neglected in this discourse is the firsthand experience of students, an oversight that veteran documentarians Marcia Jarmel and Ken Schneider beautifully rectify with their latest effort.

Closely following four very different local public-schoolers through an academic year, they draw on subtle nuances of the kids’ stories to illustrate the complex shades and permutations of bilingual schooling. Two children are placed in immersion programs to retain their native tongues while learning English, and the other two are in the reverse situation. Their parents list both familiar and surprising reasons for enrolling their children, but each remains a strong proponent of the programs despite criticism from extended family, friends and a loud chorus of English-only activists. Even while dismissing common barbs, the families must confront unique challenges both humorous and serious.

With San Francisco becoming the first city to mandate access to bilingual opportunities for all public schoolchildren, this thought-provoking documentary could hardly be timelier.

Filmmaker Marcia Jarmel will be present to dialogue with the audience on this important topic.