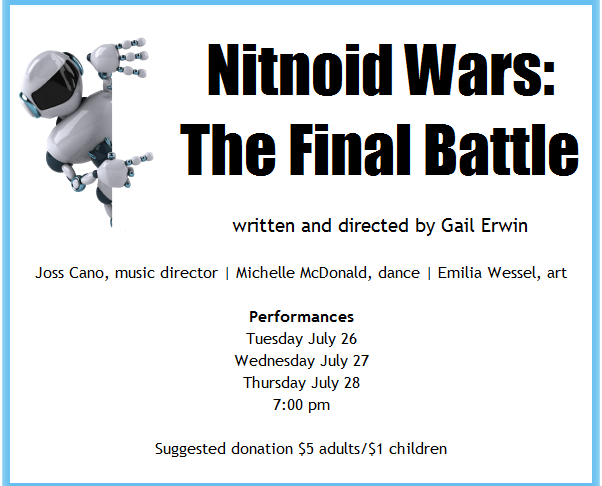 This is the third play in a trilogy set in the future, when the misuses of nano-science and the terrible effects of earthquakes and tsunamis have put the world in the hands of a heartless dictator, a modern Kubla Khan.  There is action, music, and dance in this final play about the brave Grungerats, on the run from Kubla and his Censoids, as they battle to determine who will govern the Earth.

Coastal Rep’s Summer Drama Day Camp is the only camp in the Bay Area led by a published playwright who has written plays expressly for young actor/performers, with all of the students actively involved in all areas of the production.  While other camps focus on plays or musicals written for older performers and adapted for youngsters, The Nitnoid plays were written to be performed by actors 8-16.

The children are involved in all aspects of the production, from acting, singing, and dancing to costume and set construction. Drama and Lead Teacher Gail Erwin, is a former playwright-in-residence at the Omaha Theater Company for Young People.

Join us this week to experience yet another dimension in live theater on the Coast!