Press release
Posted by Reba Vanderpool on Tue, May 5, 2009 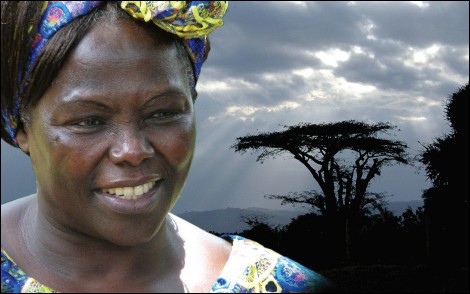 On Saturday May 9th, The Visionary Edge will screen the award-winning documentary Taking Root: The Vision of Wangari Maathai. The event will be co-hosted by and presented at the Community United Methodist Church in Half Moon Bay.

Planting trees for fuel, shade, and food is not something that anyone would imagine as the first step toward winning the Nobel Peace Prize. Yet with that simple act Wangari Maathai, a woman born in rural Kenya, started down the path that reclaimed her country’s land from 100 years of deforestation, provided new sources of food and income to rural communities, gave previously impoverished and powerless women a vital political role in their country, and ultimately helped to bring down Kenya’s twenty-four-year dictatorship.

Saturday, May 9th. Doors will open at 7:00pm, event begins at 7:30 at the Community United Methodist Church, 777 Miramontes Street (at Johnston), HMB.  The event is free to the community , however, donations are needed to cover screening costs.  Call 650-560-0200 for information and reservations.

Taking Root weaves a compelling and dramatic narrative of one woman’s personal journey in the context of the turbulent political and environmental history of her country. Raised in the rural highlands of Kenya, educated in the United States during the 1960s civil rights era, and the first female to receive a PhD in East Africa, Maathai discovered the heart of her life’s work by reconnecting with the rural women with whom she had grown up. They told her that their daily lives had become intolerable: they were walking longer distances for firewood, clean water had become scarce, the soil was disappearing from their fields, and their children were suffering from malnutrition. Maathai thought to herself, "Well, why not plant trees?" Trees provide shade, prevent soil erosion, supply firewood and building materials, and produce nutritious fruit to combat malnutrition. With this realization Maathai founded the Green Belt Movement, a grassroots organization encouraging rural women to plant trees.

A seemingly innocuous idea, Maathai soon discovered that tree planting had a ripple effect of empowering change. In the mid 1980s, Kenya was under the repressive regime of Daniel arap Moi under whose dictatorship group gatherings were outlawed. In tending their nurseries women had a legitimate reason to gather outside their homes and discuss the roots of their problems. These grassroots women soon found themselves working successively against deforestation, poverty, ignorance, embedded economic interests, and political oppression, until they became a national political force.

As the trees and the Green Belt Movement grew, a spirit of hope and confidence also grew in ordinary citizens – especially in women – only to be met with violent opposition from the government. Maathai and her colleagues soon found themselves victims of President Moi’s political oppression. In response, Maathai’s political activism only grew. At great risk she lead numerous confrontations in defense of the environment and social justice each of which brought her country closer to democracy.

Through TV footage, newspaper headlines, and chilling first person accounts Taking Root documents these dramatic confrontations of the 1980s and 1990s and captures Maathai’s infectious determination and unwavering courage. Through perseverance and widespread grassroots organization, Kenya’s fight for democracy finally prevailed. In 2002 a new democratically elected government replaced Moi’s, and Maathai became a member of the new Parliament and Assistant Minister of the Environment and Natural Resources.

And the trees continue to grow. Today there are more than 6,000 Green Belt nurseries throughout Kenya that generate income for 150,000 people, and thirty-five million trees have deeply altered the physical and social landscape of the country. The Green Belt Movement has also started programs teaching women about indigenous foods, income generating activities, AIDS, and self-empowerment. Through cinema verité footage of the tree nurseries and the women and children who tend them, Taking Root brings to life the confidence and joy of people working to improve their own lives while also ensuring the future and vitality of their land.

Through intimate conversations with Maathai, whose warm, powerful, and luminous presence imbues much of the film, Taking Root captures a world-view in which nothing is perceived as impossible, presenting an awe-inspiring profile of one woman’s thirty-year journey of courage to protect the environment, ensure equality between men and women, defend human rights, and promote democracy—all sprouting from the achievable act of planting trees.
According to Reba Vanderpool of The Visionary Edge, "I am thrilled to find such amazing people like Wangari Maathai. She is an inspiring model of how much good one determined individual can accomplish."