Barry Parr
This small photo doesn't do justice to the size of the crowd. Click for larger image. 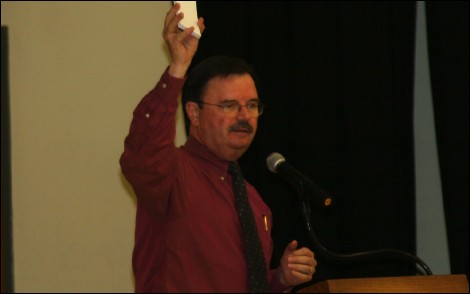 Hundreds of Coastsiders packed the Cunha Intermediate School multipurpose room for a town hall meeting on the closure of the Coastside Family Medical Center.

Even ten days after the closure of the Center, it is still impossible to get accurate information on medical records. One member of the audience contradicted Supervisor Rich Gordon, who called the meeting, on whether patients were entitled to receive their medical records without charge from the Center.

According to Gordon, the approximately 8,000 patients of the CFMC are divided in roughly into three groups:

It became clear during the Q&A that many members of the audience still expected that some accomodation could be found that would bring back the center. Supervisor Gordon offered no hope that the Center, which had declared bankruptcy, would ever reopen.

Gordon said the County had been paying the Center’s $25,000 monthly rent for the last six months, but had balked at a last-minute loan of $300,000. Gordon noted that the county already had $6 to $7 million in unfunded federal medical mandates.

About half the audience were Hispanic, and many of them did not speak English. The meeting was translated by a member of Gordon’s staff and later by a woman from the audience.

Many in the crowd were angry at the way the closure had been handled and called for CFMC board members Ev Ascher and Charise McHugh, who were at the meeting, to come to the stage.  Gordon said that although he though the handling of the closure was "unconscionable", he refused to call up the directors, saying: "We’d like someone to focus our anger on, but I’m not sure how productive that would be."

I talked to Sinclair afterward and she said that so far the emergency room at Seton was not being overtaxed by spillover from CFMC, but that many patients did not yet know that CFMC had closed or that Seton was available.

Darin Boville was at the meeting taking video for Montara Fog. He has posted full, English, and Spanish versions of the meeting.