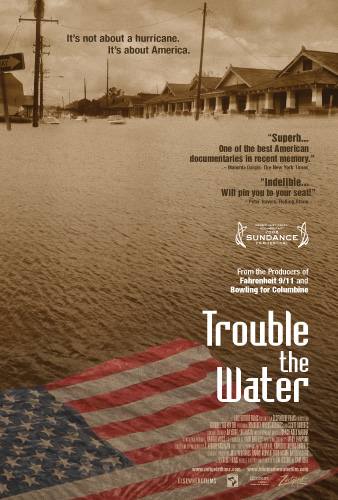 On Saturday May 23, The Visionary Edge will screen the Oscar-nominated and award-winning documentary Trouble the Water. The event will be co-hosted by and presented at the Community United Methodist Church in Half Moon Bay.

Trouble the Water takes you inside Hurricane Katrina in a way never before seen on screen. It’s a redemptive tale of two self-described street hustlers who become heroes-two unforgettable people who survive the storm and then seize a chance for a new beginning.

The film opens the day before the storm makes landfall-twenty-four year old aspiring rap artist Kimberly Rivers Roberts is turning her new video camera on herself and her 9th Ward neighbors trapped in the city. "It’s going to be a day to remember," Kim declares. With no means to leave the city and equipped with just a few supplies and her hi 8 camera, she and her husband Scott tape their harrowing ordeal as the storm rages, the nearby levee
breaches, and floodwaters fill their home and their community.

Saturday, May 23rd. Doors will open at 7:00pm, event begins at 7:30 at the Community United Methodist Church, 777 Miramontes Street (at Johnston), HMB.  The event is free to the community, however, donations are needed to cover screening expenses.  Call 650-560-0200 for information and reservations.

Seamlessly weaving 15 minutes of this home movie footage shot the day before and the day after the storm, with archival news segments and verite footage shot over two years, directors Tia Lessin and Carl Deal document a journey of remarkable people surviving not only failed levees, bungling bureaucrats and armed soldiers, but also their own past.

Trouble the Water is a story brimming with raw emotion, featuring hard-edged charismatic heroes reaching beyond themselves and their circumstances. The musical score gives way to blues, gospel, jazz and underground hip hop to set a sometimes tragic, sometimes playful, and always defiant tone. New Orleans’ hip-hop "bounce" music, like that of the better known local Jazz scene, often goes unrecognized. But it is well-imitated throughout the world. It has been "the city’s true soundtrack through the last few decades," writes music critic Kalefa Sanneh in the months after Katrina. In it, you can "hear brass bands in the synthesizers, drum lines in the rattling beats, Mardi Gras Indians in the sing-song lyrics."

Peter Travers of Rolling Stone writes "Kimberly’s star power comes from the music she writes and sings, music that was almost lost in the storm. The moment in the aftermath when she finds it and raps about her feelings will knock you off your feet…that moment gets audiences standing and cheering. Never mind Katrina, Kimberly Roberts is the real force of nature.

Reba Vanderpool of The Visionary Edge says "Trouble the Water has been supported by grants from the Sundance Institute, the Open Society Institute, and is a project of Creative Capital.  It is independent films like this that The Visionary Edge searches out to bring real messages of hope and the stories of ordinary people doing the courageous, even the impossible, in the middle of what appears to be an ordinary life."