Two Films about the Japanese-American Experience during World War II 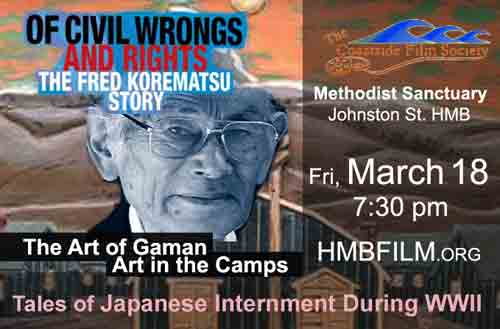 The Art of Gaman  & The Fred Korematsu Story

A documentary about the beautiful art produced within the walls of Japanese-American internment camps during World War II.  Gaman is a Japanese word for “enduring the seemingly unbearable with patience and dignity.”

The Art of Gaman began as a book and exhibition of artwork written and choreographed by Delphine Hirasuna.  Director Rick Quan took this source material and added filmed interviews of people who remember this time well in order to fill out the story.  The film will be introduced by its director, Rick Quan, a familiar face in the Bay Area thanks to his many years of service as a popular television sports anchor.

A documentary about the life of a California boy, born and raised in hills of Oakland. It was a quiet day in 1942. A shy 23-year-old welder named Fred Korematsu is having a quiet picnic with his Italian-American girlfriend when he discovers the U.S. government had big plans for him. Because Korematsu’s parents were born in Japan, he is being ordered to report to an internment camp. Korematsu refuses, moves to the Midwest, and resorts to minor plastic surgery to look less Japanese. But in those days a Japanese-American is treated with just as much suspicion as a burka-wearing Iraqi-American might encounter today. Korematsu is quickly captured and swiftly convicted of the felony of violating a military order. Korematsu fights his conviction all the way to Supreme Court. He loses his final appeal in December of 1944.

Jump forward 39 years. A San Diego professor discovers that the evidence presented to the Supreme Court in Korematsu’s case had been falsified. Korematsu’s life is thrown back into disarray. By 1983 Korematsu’s conviction has been reversed. President Clinton awards Korematsu the Presidential Medal of Freedom, the nation’s highest civilian honor. And let’s not forget that here in California Jan. 30 is now celebrated as the “Fred Korematsu Day of Civil Liberties and the Constitution,” celebrating the life of one of our greatest civil rights leaders.