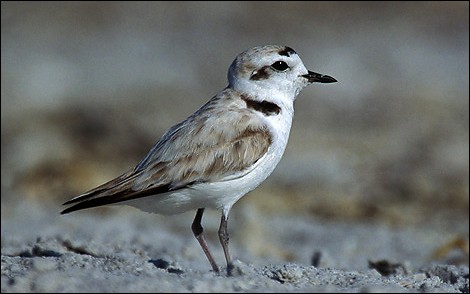 Volunteers make a difference.  Along the San Mateo County coast, trained volunteers play a major role in protecting the Western Snowy Plover—a small shorebird that lays its eggs on the sand at a few California beaches every summer.

The snowy plovers, which are listed as threatened under the Endangered Species Act, may be found on several local beaches during the winter months.  In the spring and summer, the plovers congregate on the few beaches that can provide safe nesting sites, including Half Moon Bay State Beach—a busy recreational beach where a protected habitat is set aside for the plovers to nest.

A free, one-day training workshop for prospective Plover Watch volunteers will be offered on Saturday, March 28, from 9:00 a.m. to 2:00 p.m., at the Half Moon Bay State Beach office located at 95 Kelly Avenue, in Half Moon Bay.  To register for the workshop or for more information, call Rangers Nelle Lyons or Michael Grant at (650) 726-8804, voice mailbox 7 #, or e-mail [email protected]

Volunteers in the Half Moon Bay State Beach Plover Watch program monitor the beach to help protect the plovers and point them out to beach visitors.  Public education—sometimes including presentations for school groups—is an important part of the volunteer program.

When volunteers find a plover nest—well-camouflaged eggs laid in a depression in the sand—they call in help to build a wire "exclosure" around it to prevent predators such as ravens and gulls from taking the eggs.  When the eggs hatch, about four weeks later, the plover chicks are cared for by the male parent for almost a month until they can fly (fledge).  The female parent often leaves for another beach where she may breed with another male.

The chicks are particularly vulnerable during the weeks before they fledge.  They feed themselves by foraging for small insects and crustaceans up and down the beach and easily can be lost to predators or through human disturbance.

The Plover Watch volunteers help make it possible for people and plovers to share the beach.  Without the work of the volunteers and the cooperation of visitors to the beach, it is doubtful that the snowy plover would still be nesting at Half Moon Bay.

The state park’s Plover Watch volunteer program is seeking more volunteers to monitor and protect the snowy plovers and their habitat.  During the plover nesting season, from March to September, each volunteer spends at least four hours per month on the beach. Volunteers receive ongoing natural history training, free passes for local state parks, and the satisfaction that they are helping preserve an important part of California’s natural environment.