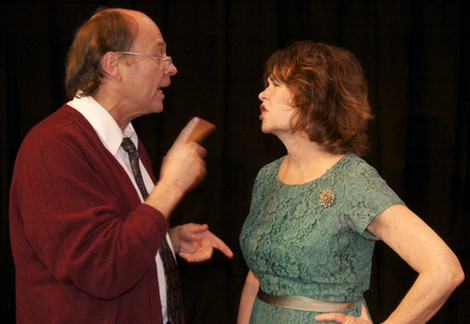 When it was written decades ago, “Who’s Afraid of Virginia Woolf?” shocked audiences with graphic, acrid sexual language today’s modern audiences may find commonplace. But the drama remains a story of fear, honesty, truth, reality and the decay of impassioned relationships – as heartbreaking and viscerally true today as its Broadway premiere in 1962.

“Who’s Afraid of Virginia Woolf?” is a deep, complex American classic. It is at once uncomfortably relatable and brutally honest. We are honored and proud to present such groundbreaking art at a theater open to the challenge of producing it,” said Tim Longo, director. “We have an all-star cast, crew and designers, and I feel lucky to be working with them all. Bottom line: Virginia Woolf is a wild ride, but it won’t disappoint.”

Considered Edward Albee’s masterpiece, the show won both the 1963 Tony Award for Best Play and the 1962-63 New York Drama Critics’ Circle Award for Best Play. Its original Broadway stars, Uta Hagen and Arthur Hill, won the 1963 Tony Awards for Best Dramatic Actor and Actress. It was also selected for the 1963 Pulitzer Prize for Drama. However, the Pulitzer advisory board—trustees of Columbia University— objected to the play’s then-controversial use of profanity and sexual themes, and overruled the prize committee, ultimately awarding no Pulitzer Prize for Drama in 1963.

“Who’s Afraid of Virginia Woolf?” was first performed in New York City in 1962. The play stunned and pleased American audiences, providing a vital insight into American life. The country was emerging from the 1950s, with conservative and well-loved Dwight “Ike” Eisenhower President and comfortably mainstream television shows such as “Leave it to Beaver” and “Father Knows Best” dominating the small screen. “Happy family values” were emphasized by politicians and popular culture. The American dream was a home, a car, kids, and a dog. The 1950s were a stable, productive time, yet, shallow trappings of success often hid real problems. It is this raw, human truth beneath a phony exterior that Edward Albee attempts to reveal in “Who’s Afraid of Virginia Woolf?”

Set on the campus of a small, New England university, the drama opens with protagonists George and Martha returning home from a faculty party. George, a disillusioned academic with failed aspirations, and Martha, his caustic wife, have a tempestuous and volatile relationship. It is 2:00 a.m, but they are
expecting guests: the new math professor and his wife. Drinks flow and inhibitions melt. Martha is determined to seduce the young professor and George couldn’t care less.

The pair fight and humiliate each other. As pretense and self-respect peel away, George and Martha use their guests as pawns, making them both witness to and participants in games of humiliation, jealousy, and brutality. Beneath the edgy banter lurks an undercurrent of tragedy and despair. Eventually, the mystery of the couple’s bitterness is exposed, revealing the degrading mess they have made of their lives. By the end of the evening, the secrets of both couples are uncovered and the lies they cling to are exposed.

The cast includes Marin-based Pennell Chapin, as Martha, and local actor Tom Woosnam as George. Younger, confident professor Nick is played by Pacifica actor Daniel Trecroci and his wife, Honey, is portrayed by Mary Waterfield from San Francisco. Woosnam is best remembered at the Rep for his performances in Moon over the Brewery and Someone Who’ll Watch Over Me. Trecoci also appeared on this stage in the past in Noises Off, Of Mice and Men and It’s a Wonderful Life.

Chapin and Woosnam are two formidable warriors fighting through a painful yet often funny long night to dawning of truth over illusion. They are well paired with Trecroci and Waterfield, the young couple drafted as participants in the wee-hours war games.

Dates and show times for “Who’s Afraid of Virginia Woolf?” are April 1 through April 23, 2011; Friday and Saturday nights at 8 p.m. with Sunday matinees at 2pm.

For more information and to purchase tickets Contact (650) 569-3266, or visit www.coastalrep.com. Coastal Repertory Theatre is located at 1167 Main Street in Half Moon Bay, California.