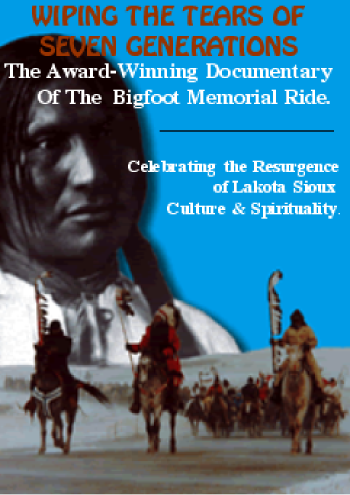 On Saturday February 27th, The Visionary Edge will present a screening of Wiping the Tears of Seven Generations, the award-winning documentary of The Bigfoot Memorial Ride celebrating the resurgence of Lakota Sioux culture and spirituality.

This celebrated documentary relates the story of how the Lakota Nation mourned the loss of their loved ones for 100 years—seven generations of the Lakota. They also mourned the loss of some of their people’s sacred knowledge, which died with the elders at Wounded Knee. But in 1990, inspired by dreams and visions of unity and spiritual awakening, a group of Lakota decided to bring their people out of mourning through a traditional Lakota ceremony called "Washigila," or "Wiping The Tears." The Bigfoot Memorial Ride was that ceremony.

Four times each December beginning in 1986 and continuing to 1990, as many as 300 Native American riders at a time traveled by horseback 250 miles along pathways through South Dakota which are sanctified by the blood of those who died at the place Natives call "Greasy Grass," and most others know as Wounded Knee. These memorial rides, with one participant for each of those massacred in December of 1890, were often undertaken in great hardship and were intended as a sacrifice which would clear the way for a recovery of Lakota ways, traditions, and sacred lands. In this documentary, in addition to footage of the ride and its riders, young Lakota express their hopes for the future, while older tribe members recall the painful and difficult times they all survived in order to reach this point.

Saturday, February 27th. Doors will open at 7:00pm, event begins at 7:30. Community United Methodist Church, 777 Miramontes Street (at Johnston), HMB. Suggested donation $10 advance, $15 door. No one will be turned away for lack of funds. Call 650-207-3440 for information and reservations.

Wiping the Tears of Seven Generations interweaves stunningly beautiful contemporary scenes of the ride itself with archival film and photos and expert commentary to illustrate the history of the Lakota and provide an unforgettably poignant account of the events leading up to, including, and following the Wounded Knee Massacre.

Acccording to David Claudio Iglesisas, Native Peoples Magazine, it is “A tour-de-force that effectively, without rancor, tells of the devastation that was visited upon not only Chief Bigfoot’s defenseless men, women, and children on the frozen South Dakota prairie in 1890, but its lingering generational impact. The Lakota narrator, with even voice, tells of the unspeakable horror of Wounded Knee. Most importantly, the film is ultimately about the hope and rebirth of the Lakota people. This is a must for those who want to see hope triumph over the grief of seven generations”.

“A powerful tool in increasing understanding of our values, our way of life, and what we stand for as Indian people. This film has had a significant impact on everyone I know who has seen it, regardless of race”. Reuben Snake(Winnebago), Director, The Native American Religious Freedom Project.

Wiping the Tears of Seven Generations was produced by Gary Rhine for Kifaru Productions and directed by Fidel Moreno (Yaqui/Huichol) and Gary Rhine; the eloquent narration is delivered by Hanna Left Hand Bull Fixico (Lakota).

Joining us to introduce the film will be Ed Morillo who is known as a strong prayer man among the native community.  He works with the California 500 Mile American Indian Spirit Run and in particular, the elderly, as well as those in prisons and hospitals.

Edward never intrudes, but when asked, is a great orator. It is said that to be a good orator, one must listen well.  There is much we can learn from a such strong prayer man who listens deeply and is able to provide context and deliver messages in a good way between different camps.

Edward will be supported by John Malloy. John has dedicated his life to making the world a better place and has had a positive impact on the lives of countless people. He founded and directed the successful Foundry Community School in San Jose for 32 years.

John has been involved with the Native American community since 1968. He first ran the California 500 Mile American Indian Spiritual Marathon in 1980, and has been involved in directing the run for many years.  He is the glue that holds the circle together and is the keeper of the sacred running staffs.

In 1988, he took 120 kids from ghettos across the US to Wounded Knee on Pine Ridge Reservation in South Dakota.  He was honored when the elders gave him eleven kids to “raise”. He started his group running every morning. Before long the entire camp had joined them.  The elders, pleased with John’s work with the kids, gave him the ceremonial name of Shanti Wastaa, which means “good heart”. Being on the Pine Ridge Reservation, walking the ground at Wounded Knee, helped make him sense of things. His teaching: “the harder the circumstances, the stronger the prayer.”

This event will be co-hosted by The Visionary Edge and Community United Methodist Church, and sponsored by Mike Schelp of San Mateo Coast Properties.  Said Vanderpool of The Visionary Edge “We are hoping to find corporate and professional sponsors for this series so we can bring future events to the community without charge.  The topics are important and the events are great opportunities for growth, learning, and tool gathering, as well as for developing community and support networks.”