Woven Songs of the Amazon, Saturday 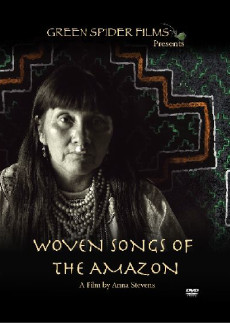 Saturday April 10, The Visionary Edge will present a screening of Woven Songs of the Amazon. New Mexico filmmaker, Anna Stevens, will join us to talk about the film and perhaps give a demonstration of the icaros, the sacred healing songs of the Peruvian Shipibo tribe.

Anna is the founder of Green Spider Films which gives indigenous peoples of the world a voice through film, to honor their spirits and wisdom and work with them to bring their traditions, healing knowledge, and understanding of nature to the world. Says Anna “By showing what is worth preserving, rather than concentrating on what is being lost, we strive to aid in preserving indigenous peoples, their cultures and environments during these times of great challenge and global change. GSF has a high ethic of filmmaking. We draw from a pool of talented and professional crew from around the world, and we strive to live up to our reputation for producing meaningful and beautiful, quality work.”

Woven Songs of the Amazon is a documentary film about the ancient Shipibo tradition of song patterns. The Shipibo are one of fourteen indigenous tribes living deep within the Amazon basin of Peru. Throughout history they have recorded their songs, or icaros, in a unique system of elaborate geometric designs that correlate and interact directly with the natural world. Very little is known about the connection between the icaros and the patterns that appear on everything from their textiles to their pottery, jewelry, and even body art. Woven Songs of the Amazon tells the story of this rich, colorful and ancient cultural tradition that is rapidly being lost, and the efforts by one family to preserve, protect and keep the vast knowledge of the icaros and the song patterns alive. The film focuses on Herlinda, a Shipibo elder, carrier of the song pattern tradition and the matriarch of her village. Through interviews, demonstrations, personal accounts, Shipibo mythology and beautiful footage of the Peruvian Amazon and the Shipibo people, the film shows the origin of the song patterns, what they are, how they are used, and the Shipibos’ struggle in preserving it and passing it down to the younger generations as the western world continually encroaches, threatening their culture.

The Shipibo are a nation of about thirty five thousand indigenous people living in the Peruvian Amazon region. They are a shamanically based people deeply influenced by the power of the plants, animals, and natural elements. The Shipibos are specialists in seeing the patterns in nature and reproducing them for protection, healing, abundance, harmony, and a wide variety of purposes. Each design has a specific meaning and purpose. They are artful prayers that can also be sung as an "Icaro", or sacred song. The Shipibo place these designs on their homes for protection, on their clothing for healing, and on their boats for abundance in fishing. Each design pattern functions like a musical score, a prayerful song that is being sung endlessly to Spirit for beneficial results similar to the way a Tibetan prayer flag multiplies its prayers by waving perpetually in the wind.  The Shipibos have great reverance for these designs and consider them to carry great power. According to Stevens, “From our experience with them we can attest that this is so.”

Anna will bring with her some of the Woven Songs, Shipibo patterns on various textiles and products which will be for sale.  Proceeds will go to support the Shipibo and their tradition of recording, preserving and teaching their sacred songs to the younger generations.

This event will be co-hosted by The Visionary Edge and Community United Methodist Church, and sponsored by Mike Schelp of San Mateo Coast Properties.  Said Vanderpool of The Visionary Edge “We are hoping to find corporate and professional sponsors for this series so we can bring future events to the community without charge.  The topics are important and the events are great opportunities for growth, learning, and tool gathering, as well as for developing community and support networks.”

Reviews “The Shipibo have a hauntingly beautiful style of ayahuasca songs. These songs can have the power to purify the environment in which they are played, as well as assist in healing/cleansing the body, mind and spirit of the listener. “ Darshan Baba, AUM

“This is an amazing DVD on shipibo shamanism, ayahuasca, shipibo textiles and the interconnectedness of patterns, vision and shipibo culture. “ Tribe.net