2988
04/09/15
2000 block of Purissima Creek RdUn-incorporated
Misdemeanor warrant
Deputies made contact with subject wanted on a misdemeanor warrant out of San Mateo County. He was cited and released on his promise to appear.
Male, age 44 of Unincorporated SM County

2948
04/08/00
0-100 block of Miramontes Pt Rd, HMB
Felony warrant602(N)(1)PC-Trespass: Refuse to leave property466PC-Possess burglary tools148(A)(1)PC-Resist or obstruct officer
Deputies were dispatched to report of unwanted guest at a hotel, who refused to leave. The subject was found to be wanted on a warrant out of Foster City. She was also found in possession of three small lock picks, a drill set, and a book on lock picking. The woman was arrested and transported to SM County Jail.
Female, age 36, Transient

There will be a Summer Camp Fair this Saturday, April 12, from 10am to 2pm at New Leaf Market in Half Moon Bay, rain or shine. There will be a free Raffle and BBQ benefiting the Coastside Child Development Center, and a live band.

Learn about Coastside summer camps and make this a summer your child will remember for a lifetime. It’s an easy way to plan your child’s summer all at once. Many of the local camps in one spot – for one day only.

Camps scheduled to attend include: 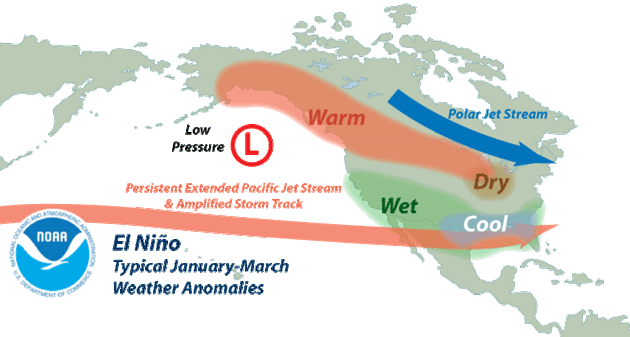 The consensus forecast of the odds of an El Niño developing in the winter of 2014/15 has increased 52% to 64% since early March.

Despite this greater model consensus, there remains considerable uncertainty as to when El Niño will develop and how strong it may become. This uncertainty is amplified by the inherently lower forecast skill of the models for forecasts made in the spring. While ENSO-neutral is favored for Northern Hemisphere spring, the chances of El Niño increase during the remainder of the year, and exceed 50% by the summer.

El Niño can lead to significantly wetter winters in northwest Mexico and the southwest United States, including central and southern California. The Coastside is on the edge of the affected area, but some climate scientists are predicting that if there is an El Niño next winter, it could be particularly strong. 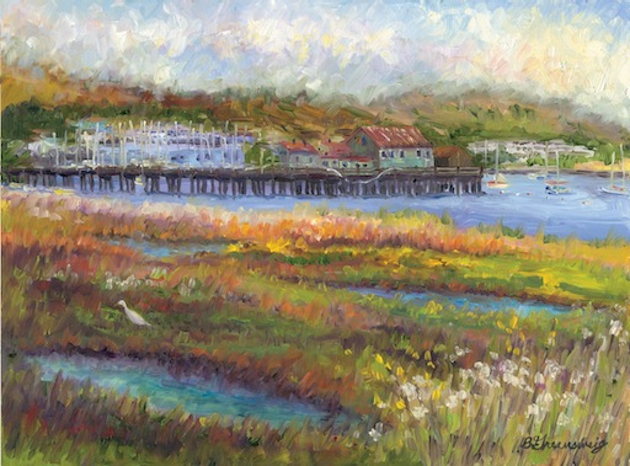 You’re invited to the Coastside Land Trust Gallery on Friday April 11 from 5 to 8pm for the opening and artists’ reception of the gallery’s Spring Landscapes and Wildflowers Show. California’s flourishing spring season is expressed in 31 original pieces by 21 local artists. Meet the artists, enjoy light refreshments, and view scenes of Half Moon Bay flower fields, central valley almond orchards, and more. 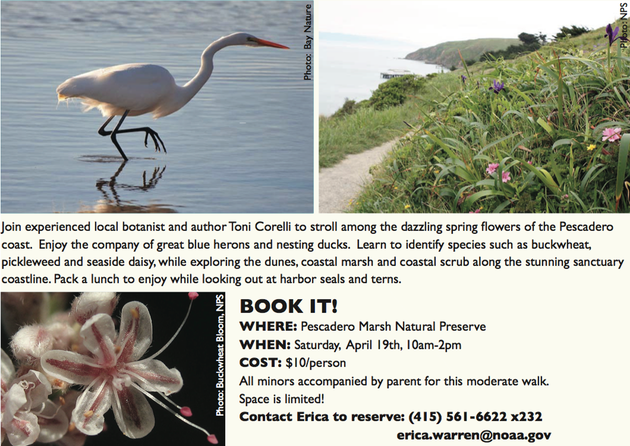 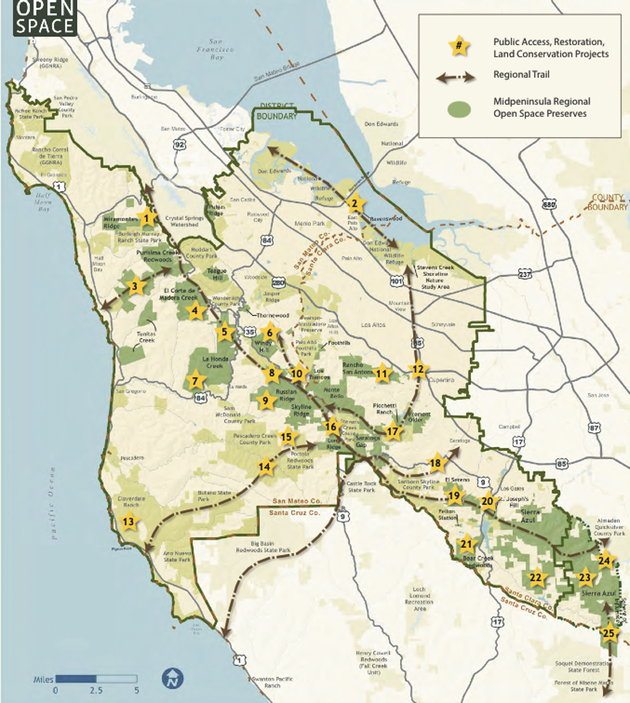 The Midcoast Community Council April 9 agenda is posted with supporting documents on the MCC website.

Midpeninsula Regional Open Space District General Manager Steve Abbors will give a presentation on the recently completed Vision Plan and the June 3 Ballot Measure AA, Regional Open Space Access, Preservation and Restoration Bond.  This is an informational item only.

Initial MCC comments regarding Big Wave Project North Parcel Alternative will be considered (draft comments are posted on the MCC website [pdf]) The project application is not yet complete, but Planning Department staff is requesting early comments from various agencies by April 11.  Comments at this time are focused on completeness and accuracy of the application.  This is not the time to weigh in with opinions on the project as a whole, which should be directed to the Planning Commission, who are the decision makers, later in the process.

Last November MCC hosted an informational presentation by Big Wave Project Engineer Scott Holmes, followed by Q&A. A pdf of the presentation, plus meeting minutes and video, are available on the MCC website on its Big Wave issues page.

You won’t be doing this for a while.

California State Parks reports that the pedestrian/bicycle bridge crossing of Pilarcitos Creek on the Coastal Trail is closed.  The brides is between Venice Beach and Francis Beach.  A section of the bridge failed and State Parks has started the process to “replace” the bridge. The bridge is closed “until the replacement or repairs occur”. 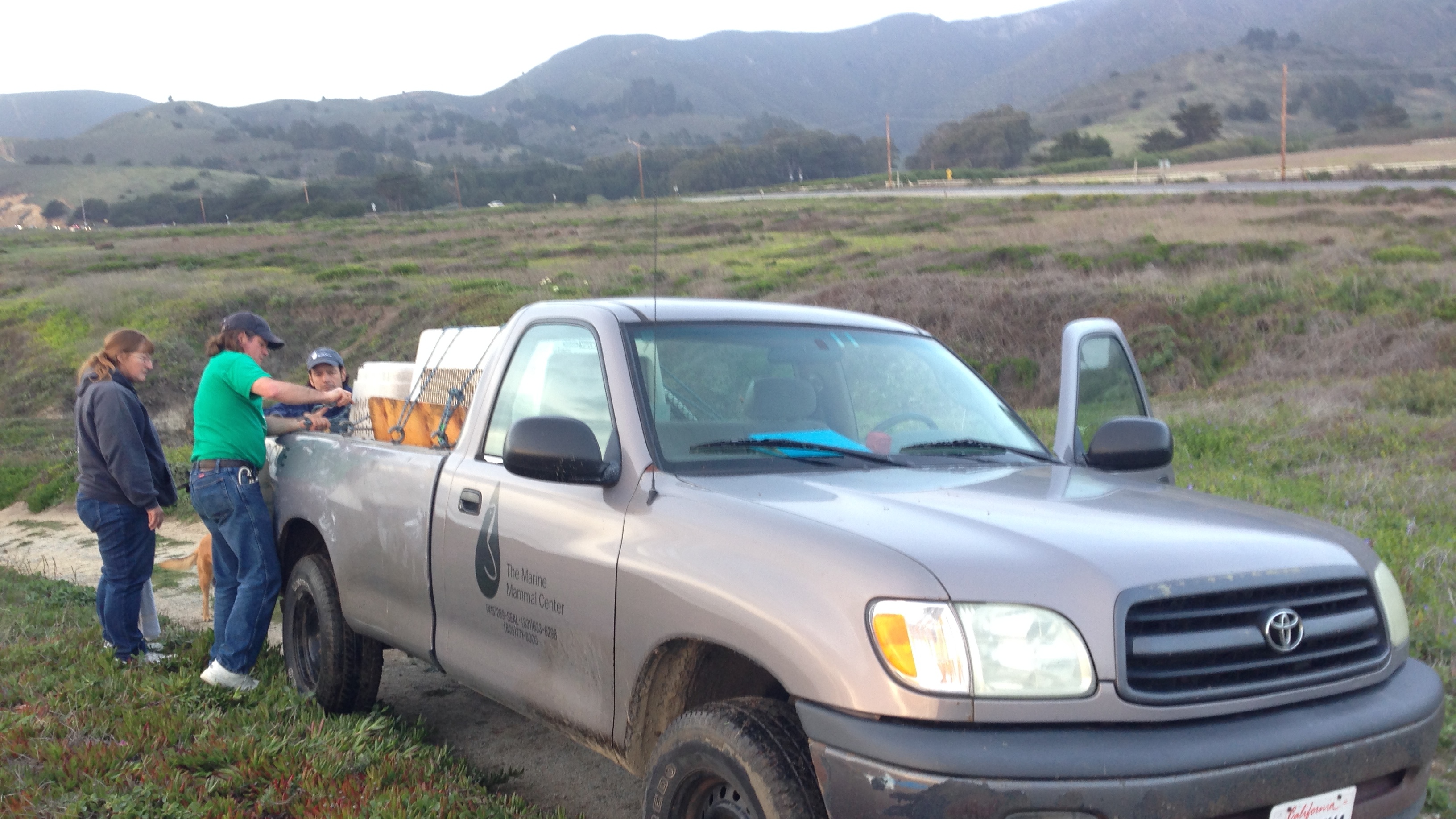 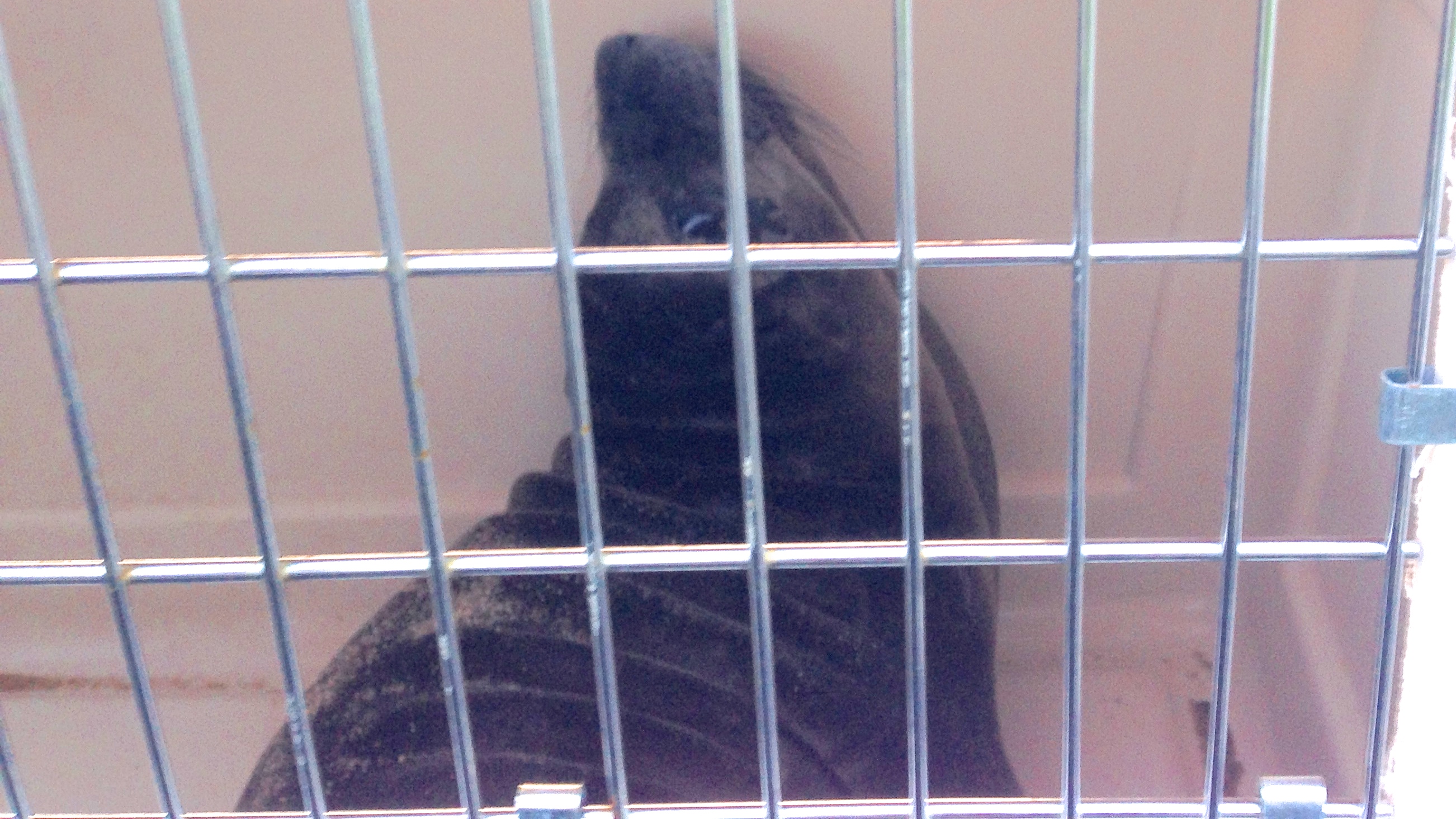 Harbor seal pups are now being born on Bay Area beaches, and the Farallones National Marine Sanctuary advises beachgoers against interacting with any seal pups on the beach. Newborn harbor seal pups, born in late winter and spring, could suffer permanent harm if they are moved. Because seals are federally protected animals, you could also incur legal penalties.

Each year, healthy harbor seal pups are separated from their mothers by people who mistake them for orphans. Harbor seal mothers normally leave their pups unattended on beaches while feeding at sea. They will later rejoin and nurse them. The presence of humans or dogs near a seal pup could prevent a mother seal from reuniting with her young one. “The rule of thumb is, if a seal reacts to your presence – you’re too close,” said Jan Roletto, sanctuary marine biologist. “Avoid eye contact and back away slowly until they no longer notice you.”

You can report suspected orphaned or injured pups to a park ranger, or to the Marine Mammal Center at 415-289-7325 24 hrs a day

About a fifth of the state’s harbor seals live in the Gulf of the Farallones sanctuary. The largest breeding grounds are in the Pt. Reyes National Seashore. In San Mateo County, the rookeries are mainly at Fitzgerald Marine Reserve and Bean Hollow. Harbor seals haul out in groups ranging from a few to several hundred. Females generally give birth on sandy beaches or rocky reefs to a single pup, which nurses for three to four weeks.

Harbor District moves its offices back to the coast 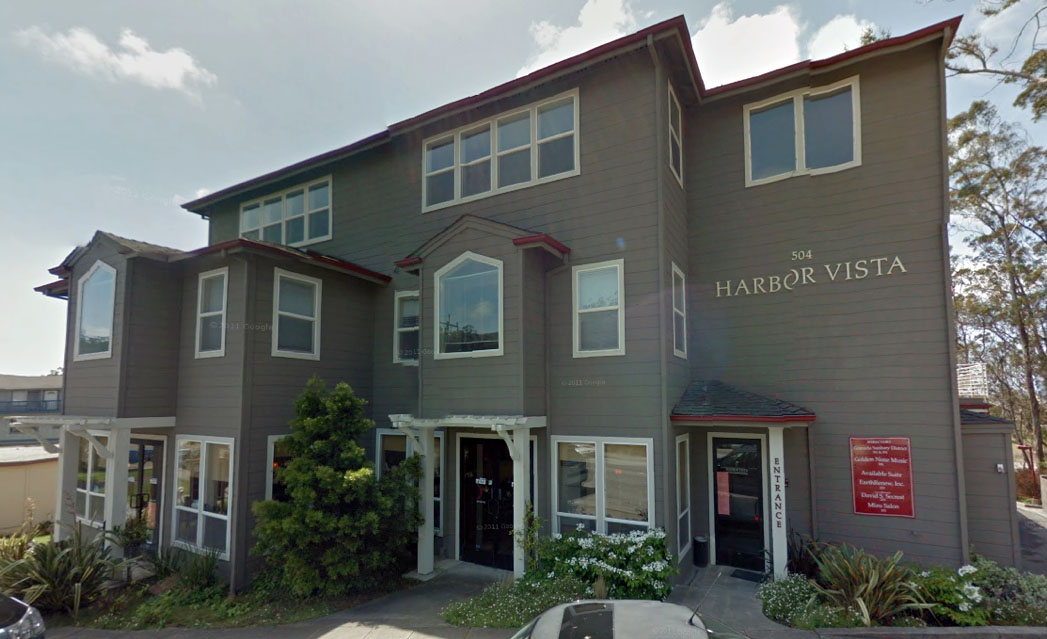 The Harbor Commission voted unanimously on April 2 to purchase the building at 504 Avenue Alhambra in El Granada where they will relocate their administrative offices from rented quarters in South San Francisco which they have occupied for almost 10 years.

The 2004 decision to move out of cramped quarters at Pillar Point Harbor was a contentious one, with former Commissioners Campbell and Lundie opposed.  The move to rented quarters was meant to be temporary, up to five years, during which time staff would find permanent office space back on the coast for which rent payments would not be required.  Office rent at Oyster Point Marina Plaza costs the Harbor District $90,000 per year.

Over the years, simple administrative office needs evolved into plans for construction of a much larger multi-use building on the waterfront at Pillar Point Harbor, which met with public resistance and had no confirmed tenants.  The District is just now beginning the process of developing a Strategic Business Plan to update their goals.

The $1.8 million purchase price for the 8,050-square-foot, three-story building at 504 Avenue Alhambra will be paid in cash. The District has reserves set aside for this purpose from the sale of parcels deeded to it in the 1950’s along Obispo Road in El Granada: the firehouse, Burnham Strip, and the empty lot next to the Post Office.  The third floor of the building is currently leased by Granada Sanitary District for $3,000/month, and it is expected that they will stay.

Meet behind Seton Coastside Hospital, 600 Marine Blvd, Moss Beach, Saturday, April 5. The project will run from 10am to 1pm. Volunteers are asked to walk or carpool as there is limited parking behind the hospital.

Bring a Volunteer Agreement Form [PDF]. If you are under the age of 18, make sure the parent/guardian approval section is signed. Bring a personal water bottle. There will be water stations for refills. Wear clothes that can get dirty. Long pants and closed-toe shoes are required. Bring layers for changing weather and rain gear if necessary. Bring a hat and wear sunscreen. If you have a favorite pair of work gloves, feel free to bring them.

The program leader will provide all the necessary tools, supplies, gloves, and training. Project leaders are trained to deal with emergency situations and will have a first aid kit on site.